Seminole Hard Rock Tampa, Hands Across the Bay Unite For the Month of September 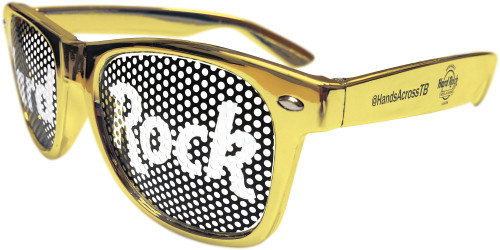 TAMPA, Fla. (September 1, 2015) – During the month of September, Seminole Hard Rock Tampa guests will have the chance to support Julie Weintraub’s Hands Across the Bay.

Hands Across the Bay was developed to positively impact the lives of as many Tampa Bay residents as possible. It assists and mentors hardworking families in need, advocates for change, supports other organizations and spreads love with various acts of kindness. Through its work, the organization hopes to inspire the community to become more compassionate, empathetic and charitable.

The casino will be donating 100 percent of the proceeds generated from sales of limited-edition Hands Across the Bay gold sunglasses from the Rock Shop, as well as proceeds from sales of the “2015 Seminole Hard Rock Girls Calendar” during the month of September.

To further support Hands Across the Bay, a slot tournament will be held at the Hard Rock Cafe Tampa on Sunday, September 27, from 3 p.m. to 7 p.m. This event is open to the public. The entry fee for the tournament will be $10 and 50 percent of those proceeds will be donated to Hands Across the Bay and 50 percent will be added to the prize pool. Tickets can be purchased at the Rock Shop beforehand or upon entry to the event.

A red carpet ceremony featuring local community members will begin at 3 p.m. and will precede a concert in Hard Rock Cafe Tampa by The Cruz Brothers.

Following the concert, Hands Across the Bay will be presented with a check based on the amount of funds raised during the month of September.