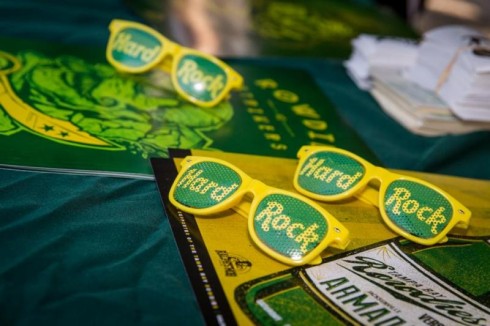 Prior to the 7:30 p.m. start of the match, Seminole Hard Rock Tampa will stage a pre-match tailgate party at 6 p.m. which will include live entertainment by local Hard Rock Cafe Tampa ambassador band “Infinity on High.” A gold carpet ceremony at 5:30 p.m. will precede the tailgate party.

During the month of September, the Rowdies will “Go Gold” to help raise awareness for the fight against childhood cancer, the number one disease killer of children in the United States.

Gold is the ribbon color that represents childhood cancer awareness, while September is the month of increased exposure and awareness. Every day 43 children in the United States are told they have cancer.

All of the September matches for the Rowdies will feature halftime check presentations from schools, businesses and organizations to pediatric cancer organizations to include Seminole Hard Rock Tampa’s $10,000 donation at halftime of the match against Indy Eleven.

About Hard Rock International
With a total of 203 venues in 64 countries, including 156 cafes, 22 hotels and 11 casinos, Hard Rock International (HRI) is one of the most globally recognized companies. Beginning with an Eric Clapton guitar, Hard Rock owns the world’s greatest collection of music memorabilia, which is displayed at its locations around the globe. Hard Rock is also known for its collectible fashion and music-related merchandise, Hard Rock Live performance venues and an award-winning website. HRI owns the global trademark for all Hard Rock brands. The company owns, operates and franchises Cafes in iconic cities including London, New York, San Francisco, Sydney and Dubai. HRI also owns, licenses and/or manages hotel/casino properties worldwide. Destinations include the company’s two most successful Hotel and Casino properties in Tampa and Hollywood, Fl., both owned and operated by HRI parent company The Seminole Tribe of Florida, as well as other exciting locations including Bali, Chicago, Cancun, Ibiza, Las Vegas, Macau and San Diego. Upcoming new Hard Rock Cafe locations include San Juan, Lagos and Busan, South Korea. New Hard Rock Hotel projects include Daytona Beach, Dubai, Los Cabos, Tenerife, Abu Dhabi, and Shenzhen and Haikou in China. For more information on Hard Rock International, visit www.hardrock.com.
###