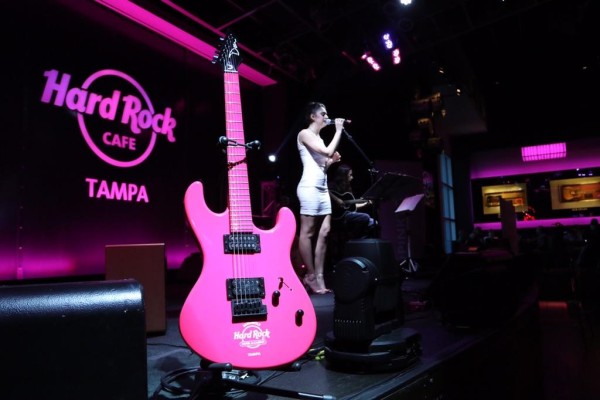 This will be the 16th year of Hard Rock International’s support of PINKTOBER® and the eighth year of Seminole Hard Rock Tampa’s involvement. Last year, the property raised more than $80,000 during its PINKTOBER® program to help fund research for prevention and a cure for breast cancer.

A major component of the program will once again be Seminole Hard Rock Tampa’s $50,000 title sponsorship of the American Cancer Society’s Making Strides Against Breast Cancer Walk, scheduled for Saturday, October 24, at Tampa’s Amalie Arena beginning at 9 a.m.

Throughout October, the property will participate in Hard Rock’s “Get into Bed for the Cause” program which will offer guests luxurious pink sheets, pink duvet covers, pink robes, an iconic Hard Rock PINKTOBER® pin and a signature turndown service. When guests stay in pink rooms, 25 percent of the room rate goes directly to The Breast Cancer Research Foundation®. Additionally, a “Pink-Tini” will be sold during the month.

The property’s Rock Spa will participate in PINKTOBER® as well by launching a new scent called Pink Moscato. Pink champagne will also be offered with certain services such as a Signature Pedicure (Walk This Way) and a Signature Manicure (Be Good to Yourself).

Property team members will have the opportunity to donate one percent of their weekly paycheck to the PINKTOBER® campaign beginning October 1 and every “Think Pink Thursday” thereafter through October.

To further support PINKTOBER®, the property will host a wrap party which includes a benefit concert and slot tournament to be held at the Hard Rock Cafe Tampa on Friday, October 30, from 3 p.m. to 7 p.m. This event is open to the public.

The entry fee for the slot tournament will be $10 and 50 percent of those proceeds will be donated to Making Strides Against Breast Cancer and 50 percent will be added to the prize pool. Tickets can be purchased at the Rock Shop beforehand or upon entry to the event.

Following the concert, Making Strides Against Breast Cancer (American Cancer Society) will be presented a check based on the amount of donations collected in the month of October.