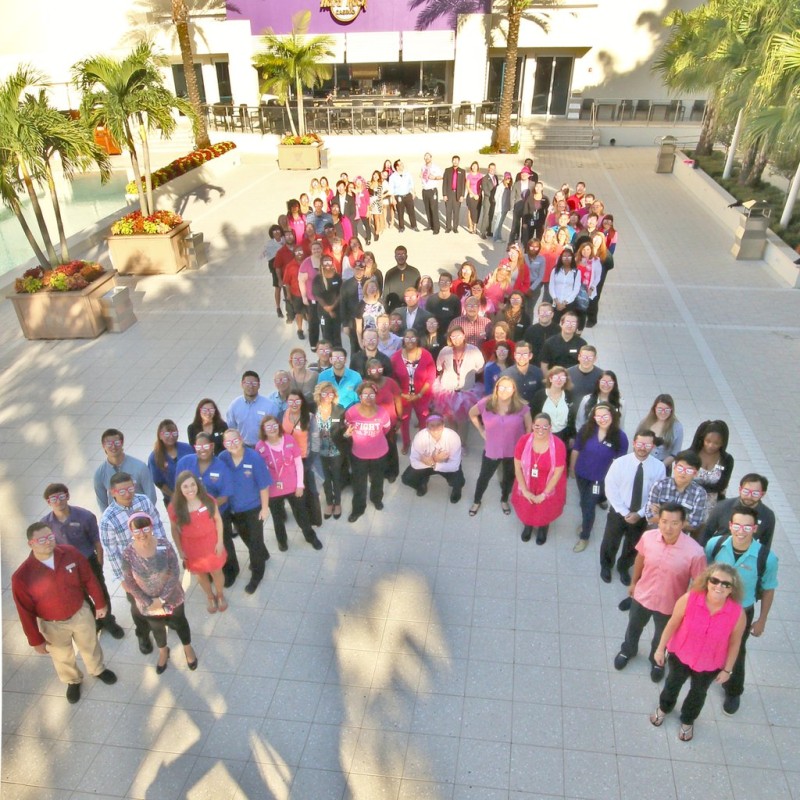 To date, a total of 970 team members have donated one percent of their weekly paychecks for the month of October.
This is the 16th year of Hard Rock International’s support of PINKTOBER® and the eighth year of Seminole Hard Rock Tampa’s involvement.
A major component of this year’s program will once again be Seminole Hard Rock Tampa’s $50,000 sponsorship of the American Cancer Society’s Making Strides Against Breast Cancer Walk, scheduled for this Saturday, October 24, at Tampa’s Amalie Arena beginning at 9 a.m.
The property has 223 team members signed up for the walk, which places it in the number one spot for fundraising as connected to Making Strides Tampa.
About Seminole Hard Rock Hotel & Casino Tampa
Seminole Hard Rock Hotel & Casino Tampa is the premier entertainment destination of Central Florida and the place where celebrities love to stay and play. Owned and operated by the Seminole Tribe of Florida, this electrifying casino destination is one of the most successful and largest casinos in the world and is located in Tampa, Florida off of I-4 at North Orient Road and Hillsborough Avenue, between I-75 and I-275, about 10 minutes east of downtown Tampa. Featuring high stakes table games along with thousands of the hottest slot machines, the rock star amenities at this AAA Four Diamond rated hotel and casino range from seven award-winning Zagat-rated restaurants, a newly renovated Rock Spa® and VIP services galore. The casino offers a valet service or free, self-parking. For more information, please call 866-502-PLAY or visit us online and via Facebook, Twitter, Instagram and Pinterest.
About Hard Rock International
With a total of 204 venues in 64 countries, including 157 cafes, 22 hotels and 11 casinos, Hard Rock International (HRI) is one of the most globally recognized companies. Beginning with an Eric Clapton guitar, Hard Rock owns the world’s greatest collection of music memorabilia, which is displayed at its locations around the globe. Hard Rock is also known for its collectible fashion and music-related merchandise, Hard Rock Live performance venues and an award-winning website. HRI owns the global trademark for all Hard Rock brands. The company owns, operates and franchises Cafes in iconic cities including London, New York, San Francisco, Sydney and Dubai. HRI also owns, licenses and/or manages hotel/casino properties worldwide. Destinations include the company’s two most successful Hotel and Casino properties in Tampa and Hollywood, Fl., both owned and operated by HRI parent company The Seminole Tribe of Florida, as well as other exciting locations including Bali, Chicago, Cancun, Ibiza, Las Vegas, Macau and San Diego. Upcoming new Hard Rock Cafe locations include San Juan, Lagos and Gran Canaria, Spain. New Hard Rock Hotel projects include Daytona Beach, Dubai, Los Cabos, Tenerife, Abu Dhabi, and Shenzhen and Haikou in China. For more information on Hard Rock International, visit www.hardrock.com.