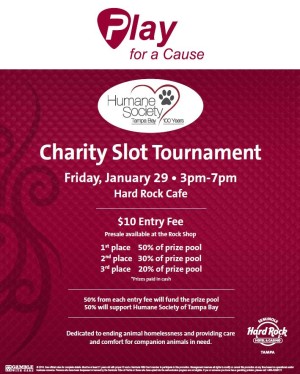 TAMPA, Fla. (January 4, 2016) – During the month of January, Seminole Hard Rock Hotel & Casino Tampa will be supporting the Humane Society of Tampa Bay.

The property will be participating in the 6th Annual Tampa Bay Community Chili & Salsa Bowl on Saturday, January 9, from 1 p.m. to 4 p.m. at the East Lake Woodlands Country Club, which will benefit the charity. Bill Gideon, Executive Chef of Seminole Hard Rock Tampa, will be competing in both the chili and salsa portions of the event.

To further support the Humane Society of Tampa Bay, a charity slot tournament will be held at Hard Rock Cafe on Friday, January 29, from 3 p.m. to 7 p.m. This event is open to the public. The entry fee for the tournament will be $10 and 50 percent of those proceeds will be donated to the charity and 50 percent will be added to the prize pool. Tickets can be purchased at the Rock Shop beforehand or upon entry to the event.

Also on January 29, a red carpet ceremony featuring local community members and Humane Society of Tampa Bay staff and volunteers will begin at 6 p.m. and will precede a benefit concert in Hard Rock Cafe by local performer Ella Jet.

Following the concert, the Humane Society of Tampa Bay will be presented with a donation check which will include proceeds from sales of the 2016 Seminole Hard Rock Girls Calendar during the month of January.

The Humane Society of Tampa Bay is dedicated to ending animal homelessness and providing care and comfort for companion animals in need.

About Hard Rock International
With a total of 209 venues in 67 countries, including 161 cafes, 23 hotels and 11 casinos, Hard Rock International (HRI) is one of the most globally recognized companies. Beginning with an Eric Clapton guitar, Hard Rock owns the world’s greatest collection of music memorabilia, which is displayed at its locations around the globe. Hard Rock is also known for its collectible fashion and music-related merchandise, Hard Rock Live performance venues and an award-winning website. HRI owns the global trademark for all Hard Rock brands. The company owns, operates and franchises Cafes in iconic cities including London, New York, San Francisco, Sydney and Dubai. HRI also owns, licenses and/or manages hotel/casino properties worldwide. Destinations include the company’s two most successful Hotel and Casino properties in Tampa and Hollywood, Fl., both owned and operated by HRI parent company The Seminole Tribe of Florida, as well as other exciting locations including Bali, Chicago, Cancun, Ibiza, Las Vegas, Macau and San Diego. Upcoming new Hard Rock Cafe locations include San Juan, Reykjavik and Gran Canaria, Spain. New Hard Rock Hotel projects include Atlanta, Berlin, Daytona Beach, Dubai, Los Cabos, Tenerife, Abu Dhabi, and Shenzhen and Haikou in China. For more information on Hard Rock International, visit www.hardrock.com.