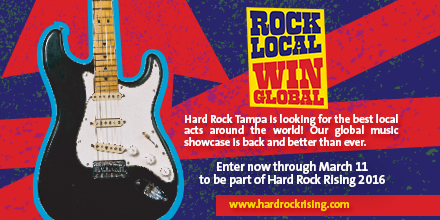 On Wednesday, June 1, 2016, up-and-coming local artists and music acts will have a chance to rise to international stardom by performing in the world’s largest, one-day music showcase taking place at participating Hard Rock Cafes around the world, including Hard Rock Cafe Tampa.

Musicians who are interested in participating can register online at HardRockRising.com today through Friday, March 11, 2016, for a chance to win $50,000, a professionally-produced music video, a Fender Instruments prize pack and an all-expenses-paid trip to perform at Hard Rock Hotel Ibiza.

Following open registration, entrants will receive a unique URL to share, encouraging their fans to vote online. The act who receives the largest number of online votes will become the wildcard “winner” for Hard Rock Cafe Tampa. The online voting period runs from Thursday, March 17 to Wednesday, March 23. Fans are able to vote for multiple artists located in the Tampa area.

The wildcard “winner” will be automatically eligible to participate in the Hard Rock Rising music showcase taking place on Wednesday, June 1, 2016, at Hard Rock Cafe Tampa. Three additional acts will be selected to perform. One winner will be selected by a panel of local industry judges.

A panel of international music industry professionals will then narrow the local cafe winners down to four regional finalists and one global grand prize winner. All will receive a professionally-produced music video that will be added regionally to the Hard Rock video system, a 1,000 count CD/DVD pack of their latest recording and video from Bison Disc, and a Fender Instruments prize pack. The grand prize winner will receive $50,000, have their video added worldwide to the Hard Rock video system and get an all-expenses-paid trip to perform at Hard Rock Hotel Ibiza in September 2016.

Hard Rock Rising is hosted, in partnership with ReverbNation, the global leader in providing independent musicians with the tools to manage every aspect of their careers. ReverbNation’s unique platform and extensive community of more than 4 million artists in over 100 countries worldwide provides undiscovered artists with a chance to catapult their music careers and expose themselves to Hard Rock’s global audience.

About ReverbNation
ReverbNation is the global leader in providing independent musicians the tools to manage every aspect of their careers. Since 2006, ReverbNation’s complete career management solution has built a community of over 4 million artists. This unrivalled access to today’s emerging talent, added to an industry leading curation capability, and a growing online audience of millions of fans, allows ReverbNation to play a pivotal role in the early identification and development of the next generation of successful artists.

Bison disc is a leader in music CD and CD package manufacturing. With 22 years of experience, Bison Disc works to provide thousands of order to musicians worldwide. Bison Disc is known for its legendary quality, large selection of packaging options and exclusive customer service.