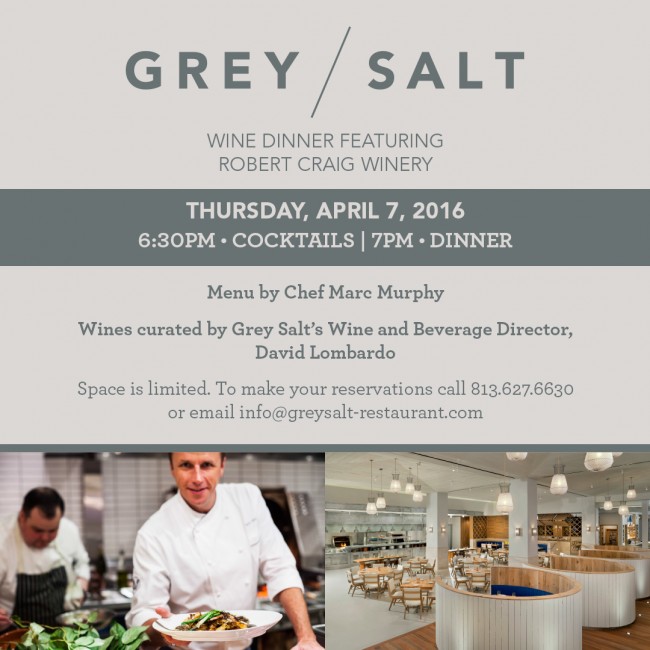 The dinner will take place in Grey Salt’s spacious Wine Room. Tickets are $150 per person (including tax and gratuity) and may be purchased by calling (813) 627-6630 or via email at [email protected].

Based in Napa Valley, Calif., Robert Craig Winery’s Vintner is Elton Slone, who is also the President and CEO. With a career in the luxury wine industry that spans nearly three decades, Slone’s daily focus at the winery is in farming, production and marketing.

Grey Salt, which opened this past November, offers a menu that takes its inspiration from Chef Murphy’s childhood, highlighting items that trace back to his French heritage and Italian roots. With a focus on locally sourced fresh seafood, the menu features artisanal flatbreads, handmade pastas as well as rotisserie and grilled meats.

In March 2004, Murphy opened his first solo enterprise with Landmarc [Tribeca], which won rave reviews both for its eclectic French and Italian menu as well as its highly untraditional wine list. Following its success, Murphy opened Ditch Plains in the West Village in 2006 serving casual, beach-style cuisine such as lobster rolls, fish tacos and the infamous ditch dog as well

as other comfort food favorites. In 2007, Murphy was given the opportunity to open another Landmarc restaurant in the prestigious Time Warner Center where he brought his bistro-style cuisine midtown. In October 2013, Murphy opened Kingside at the Viceroy New York hotel on New York’s iconic West 57th streets serving his interpretation of New American cuisine. Murphy’s restaurants now fall under the Benchmarc Restaurants by Marc Murphy name, where he acts as Executive Chef and Owner. In addition to the restaurants, Murphy also heads up the company’s catering division, Benchmarc Events by Marc Murphy, where his signature style of accessible contemporary cuisine transcends the boundaries of what is offered in his restaurant locations.