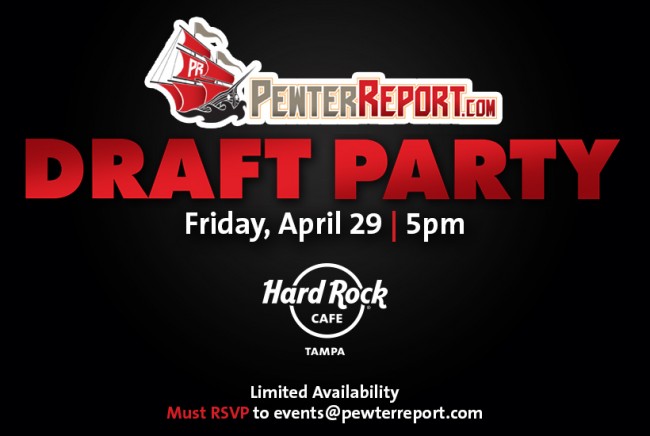 TAMPA, Fla. (April 8, 2016) – Hard Rock Cafe Tampa in Seminole Hard Rock Hotel & Casino Tampa and PewterReport.com, the ultimate source of news and coverage of the Tampa Bay Buccaneers, will partner to host a free, open to the public, “Day 2 Draft Party” on Friday, April 29, from 5 p.m. to 11 p.m.

Fans must RSVP to [email protected] to attend. Bottom tables and booths will be offered in advance of the event.

The second and third rounds of the 2016 draft will be shown live on Hard Rock Cafe’s 18-foot TV as well as multiple TVs throughout the venue.

The evening will begin with a complimentary Pair O’ Dice Brewing beer tasting from 5 p.m. to 7 p.m. In addition, there will be a Q&A session with PewterReport.com writers as well as former and current Tampa Bay players.

Hard Rock Cafe will be offering appetizer and drink specials during the event and fans will have the opportunity to win prizes. There will be WiFi available for fans who wish to follow the draft live on their laptops, tablets or mobile devices.

“PewterReport.com is thrilled to continue our partnership with Seminole Hard Rock Hotel & Casino Tampa and Hard Rock Cafe,” said PewterReport.com vice president and publisher Scott Reynolds. “The PewterReport.com Day 2 Draft Party will be the biggest and best draft event we have done. Admission is free, but reservations are required and seating is limited to the first 200 Tampa Bay fans for this exclusive event.

“The entertainment factor at Hard Rock Cafe is always top notch. Having current and former Tampa Bay players in attendance will only add to the fun and excitement of watching the draft on the massive 18-foot TV at the Hard Rock Cafe.”