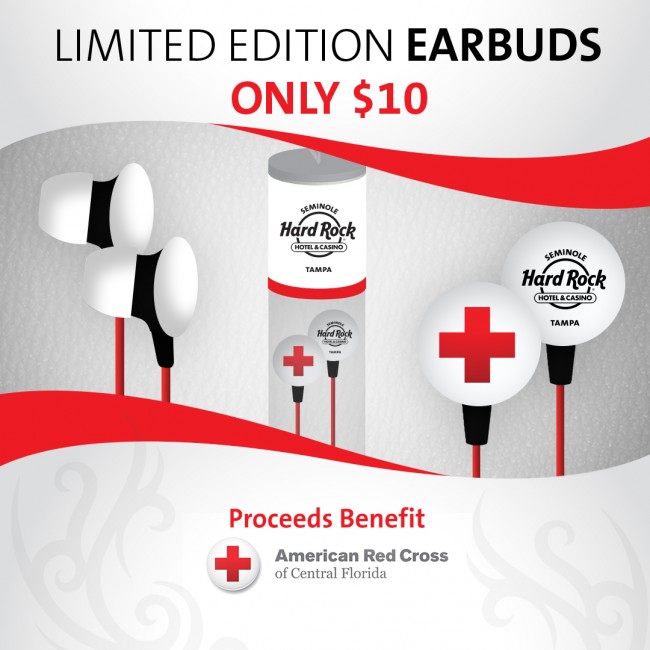 To further support the charity, the property will host an American Red Cross of Central Florida benefit event on Saturday, June 25.

Open to the public, the benefit event will feature a charity slot tournament (4 p.m.), as well as a red carpet ceremony (6 p.m.) and check presentation of funds raised for the month (8 p.m.) in Hard Rock Cafe. Area artists associated with the Tampa Bay June Acoustic Music Showcase will provide the entertainment from 7 p.m. to 10 p.m.

In addition to the benefit event, Seminole Hard Rock Tampa team members will team up with the American Red Cross on Saturday, June 18, to install smoke alarms and deliver fire prevention information in places that are at high risk for fire. Volunteer opportunities to support this activity are available by visiting the American Red Cross office (3310 W. Maine St., Tampa) between 9 a.m. and 1 p.m. on June 18.

The American Red Cross is launching a nationwide campaign to reduce the number of home fire deaths and injuries by 25 percent over the next five years.

About American Red Cross of Central Florida
Headquartered in Tampa, the Central Florida Region serves over 8.2 million people in Brevard, Charlotte, Citrus, DeSoto, Flagler, Hardee, Hernando, Hillsborough, Lake, Manatee, Orange, Osceola, Pasco, Pinellas, Polk, Sarasota, Seminole, Sumter and Volusia Counties. 24 hours a day, 7 days a week, the Central Florida Region serves families throughout our community thanks to a team of 3,000 adult and youth volunteers. Together, these dedicated volunteers donate over 300,000 hours of community service a year. These hours translate into a highly trained and highly skilled team; a fun and supportive work environment; and the delivery of critical mission services to families in desperate need every day.

Volunteers respond to approximately three disasters a day; providing food, clothing, shelter, emotional and psychological support for over 4,000 people who face devastation in the wake of disaster every year. To reduce the impact of future disasters, our volunteers teach 400 community preparedness classes a year. About 40,000 individuals are more resilient to disaster after Red Cross preparedness training. Over 90 percent of the disasters the Red Cross responds to in the Central Florida Region are home fires and 60 percent of national home fire deaths occur in residences with no working smoke alarms. Through the Red Cross Home Fire Campaign volunteers directly reduce the impact of home fires by installing 3,000 smoke alarms a year in high risk neighborhoods. More than 20,000 children receive lifesaving classes to learn first aid, CPR, water safety, disease prevention, and disaster preparedness. Every year, 50,000 more people are trained to save a life using CPR, first aid, and an Automatic External Defibrillator (AED).

More than 13,000 local military members and their families receive support from the Red Cross Service to the Armed Forces program. The Red Cross provides emergency communications while service men and women are deployed and workshops and emergency support tailored to support their needs at home.