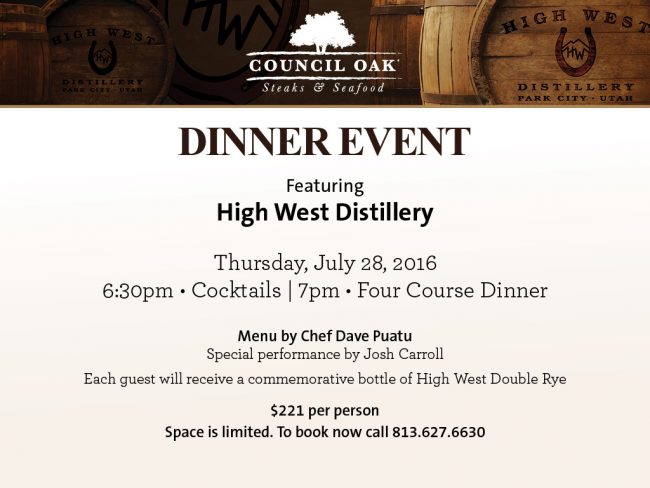 Each guest who attends will receive a commemorative bottle of High West Distillery Double Rye. There will also be a special performance by Josh Carroll.

About High West Distillery
High West Distillery was founded in 2009 by David Perkins and his wife, Jane. David, a former biochemist, was inspired to open his own distillery after seeing the parallels between the fermentation and distilling process and his own work in biochemistry during a trip to the Maker’s Mark Distillery in Loretto, Kentucky. In 2009, David and his family relocated to Park City, Utah to open the first legal distillery in Utah since 1870. They chose Park City because of David’s love of the Old West and Utah’s little-known whiskey history (see Utah’s Distilling History for more).

High West began with humble roots, opening a small, 250-gallon still and Saloon in an historic livery stable and garage. What was once a small operation in downtown Park City has grown to be an internationally-recognized brand with four unique locations. In 2015, High West opened their distillery in Wanship, Utah, which acts as a space for educational whiskey tasting, pairings and tours, and houses a 1600-gallon copper pot still. Meanwhile, the Saloon continues to operate as a must-visit gastro-distillery, featuring alpine-inspired western fare alongside the original still, the Nelson Cottage offers unique whiskey-paired dinners, and the Saloon at the Salt Lake City airport allows for some last tastes of High West on the way out of town.