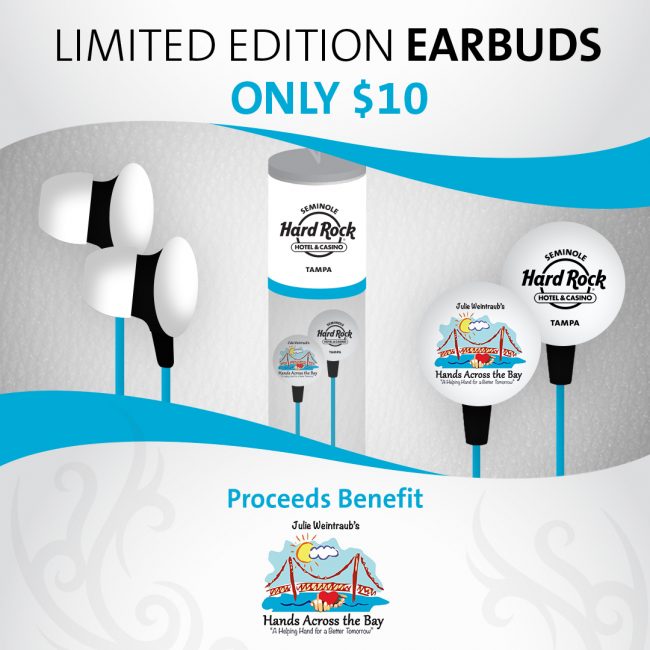 TAMPA, Fla. (July 1, 2016) – During the month of July, Seminole Hard Rock Tampa guests will have the chance to support Julie Weintraub’s Hands Across the Bay.

Hands Across the Bay was developed to positively impact the lives of as many Tampa Bay residents as possible. It assists and mentors hardworking families in need, advocates for change, supports other organizations and spreads love with various acts of kindness. Through its work, the organization hopes to inspire the community to become more compassionate, empathetic and charitable.

To further support the charity, the property will host a Hands Across the Bay benefit event on Saturday, July 30.

Open to the public, the benefit event will feature a charity slot tournament (4 p.m.), as well as a red carpet ceremony (6 p.m.), a concert by Brooke Sierra (7 p.m.) and a check presentation of funds raised for the month (8 p.m.) in Hard Rock Cafe.

In addition to the benefit event, Seminole Hard Rock Tampa team members will team up with Hands Across the Bay on Tuesday, July 12, for “Random Act of Kindness.” They will be delivering sweet treats to local law enforcement. Additionally, team members throughout July will be donating school backpacks for Hands Across the Bay’s annual backpack drive.