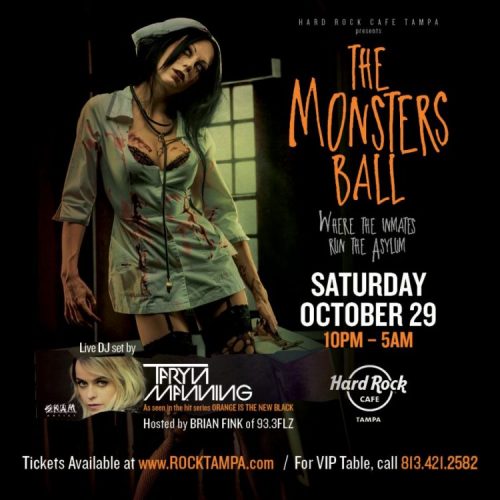 TAMPA, Fla.  (September 20, 2016) – “Monster’s Ball – Where the Inmates Run the Asylum” will take over Hard Rock Cafe Tampa on Saturday, October 29, in celebration of Halloween.

The event, scheduled for 10 p.m. to 5 a.m., will be hosted by Brian Fink of 93.3 FLZ and will feature celebrity/DJ Taryn Manning, as seen on the hit series Orange is the New Black, along with other top DJ’s from the Tampa Bay area.

Discount tickets priced at $20 are currently on sale via www.ROCKTAMPA.com. The property will also be giving away tickets on Twitter and Instagram from October 17 to October 24. There will be five winners of two tickets on each social media outlet, totaling 20 tickets.

The Seminole Hard Rock Calendar Girls, stilt walkers and dancers will also be part of the entertainment, which will be incorporated into a penitentiary insane asylum theme as tied to Manning’s Orange is the New Black.

A Falls Church, Va. native, Manning is a singer/songwriter, actress and fashion designer. She made her film debut in the teen drama Crazy/Beautiful followed by a lead part opposite Britney Spears in Crossroads, which garnered her mainstream attention. She then appeared in 8 Mile, White Oleander, A Lot Like Love and Hustle & Flow, for which she earned critical acclaim.

Manning has also had recurring roles in television on Sons of Anarchy and Hawaii Five-O, as well as a leading part as Tiffany “Pennsatucky” Doggett in the aforementioned Netflix series Orange is the New Black.

As a musician, Manning is the vocalist for the electronic duo Boomkat and is also co-owner of the clothing brand Born Uniqorn.