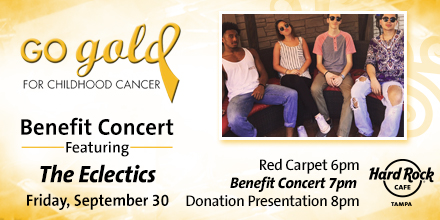 TAMPA, Fla. (September 1, 2016) – Throughout the month of September, Seminole Hard Rock Tampa will be hosting special events in support of “Go Gold for Childhood Cancer.”

The mission of “Go Gold for Childhood Cancer” is to bring awareness to childhood cancer, the number one disease killer of children in the United States. Their efforts provide funding toward research focused on less harsh treatments and more cures.

Seminole Hard Rock Tampa officially kicked off its support of “Go Gold for Childhood Cancer” earlier this month when it purchased and delivered charity t-shirts to oncology staff members at All Children’s Hospital.

During September, Monday through Friday, Rock Spa® will be donating $25 of a Rock Spa® manicure or Rock Spa® pedicure to the charity.

The property will be selling limited edition earbuds in its retail shops for $10 with 100 percent of the proceeds generated going to the organization.

Seminole Hard Rock Tampa will also join the Tampa Bay Rowdies on Saturday, September 17, to support “Go Gold for Childhood Cancer.” The property will host a tailgate party in the Al Lang Stadium parking lot featuring the 2016 Seminole Hard Rock Calendar Girls, who will be available for photos. Giant gold ribbons and swag will be distributed.

To further support the charity, the property will host a “Go Gold for Childhood Cancer” benefit event on Friday, September 30, in Hard Rock Cafe Tampa.

Open to the public, the benefit event will feature a charity slot tournament (4 p.m.); a red carpet ceremony (6 p.m.); a concert by The Eclectics featuring TB JAMS participant and Hard Rock Cafe Tampa ambassador Natalie Depergola (7 p.m.); and a check presentation of funds raised for the month (8 p.m.).

The property encourages guests to join the “Go Gold for Childhood Cancer” efforts by attending the benefit event at the end of the month. All proceeds raised will fund a pediatric research grant with the American Cancer Society.