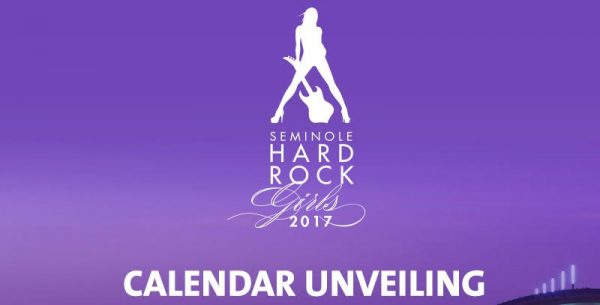 Hosted by Brian Fink with entertainment provided by DJ Davy Rolando, the event (scheduled for 7 p.m. to 10 p.m.) will include the 2017 Seminole Hard Rock Calendar Girls sporting custom dresses designed by Dara Lauria, who has been featured in Country Music Weekly.

During the event, a formal reveal of the 12 local charities the property has partnered with in connection with the calendar will also take place.

The calendar will go on sale starting Friday, December 9, at Seminole Hard Rock Tampa retail outlets. The cost per calendar will be $12 and all of the funds generated from sales through 2017 will be distributed evenly amongst the selected 12 local charities.

Each charity will be featured alongside a 2017 Seminole Hard Rock Calendar Girl in connection with her month.

Additionally, each organization will receive a benefit concert featuring Tampa Bay talent and a customized limited edition Seminole Hard Rock Tampa memorabilia item, which will be sold in the property’s retail stores with 100 percent of the proceeds benefitting the charity.

During the photo shoot, the 2017 Seminole Hard Rock Girls were given the rock star treatment with professional hair, make-up and wardrobe styling by the Glam Squad. Each girl was decked out in trendy swimwear and accessories featuring pops of neon colors, theming the calendar Neon Glam.