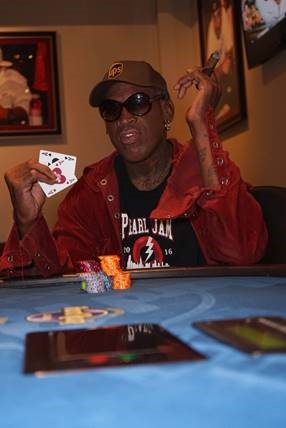 Rodman, who played for the Detroit Pistons, San Antonio Spurs, Chicago Bulls, Los Angeles Lakers and Dallas Mavericks during a 14-year career, was in town to play a few hands of poker in advance of the property unveiling its new state-of-the-art poker room on Thursday, January 12.

Seminole Hard Rock Tampa’s 46-table, non-smoking poker room will feature Wi-Fi throughout and will have the sports fan in mind (the room will offer 40 TV’s, including six 75-inch TV’s and four 65-inch TV’s).

High-stakes players will be offered an unrivaled poker experience with the opening of a new high-limit lounge featuring two VIP tables – a place where high-stakes resolutions are constantly in action and where every movement is examined and every decision is studied in an effort to gain the upper hand.

Amongst the other offerings will be a bar with seating to accommodate 15, as well as a “hidden gem” of a snack bar with seating for more than 20, and as an added convenience an outdoor covered area for smoking.