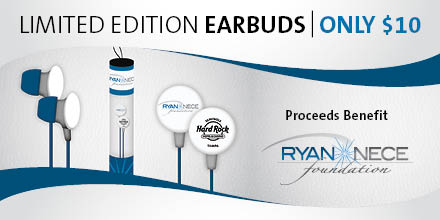 The Ryan Nece Foundation was founded in September of 2006 by the former Tampa Bay Buccaneers player Ryan Nece, to create opportunities for teens to embrace the power of giving through volunteerism and inspirational leadership programs.

Seminole Hard Rock Tampa will be selling customized limited edition earbuds in its retail shops for $10 with 100 percent of the proceeds generated going to the organization.

To further support the charity, the property will host a Ryan Nece Foundation benefit event on Thursday, December 22.

Open to the public, the benefit event will feature a charity slot tournament (4 p.m.), as well as a red carpet ceremony (6 p.m.), a concert by a local Tampa Bay performer (7 p.m.) and a check presentation of funds raised for the month (8 p.m.) in Hard Rock Cafe.