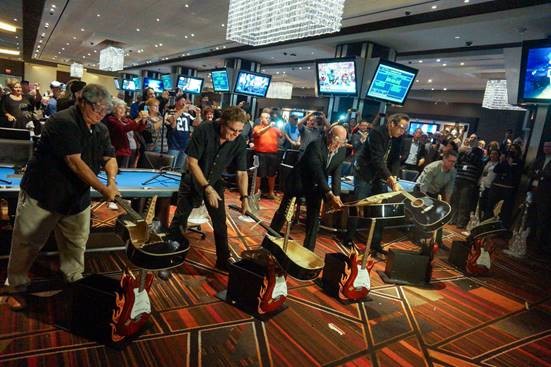 Amongst the other offerings are a bar with seating to accommodate 15, as well as a “hidden gem” of a snack bar with seating for more than 20, and as an added convenience an outdoor covered area for smoking.

To celebrate the opening of the new poker room, comedian Brad Garrett, best known for having played the role of Robert Barone in the hit CBS series Everybody Loves Raymond, performed a ceremonial guitar smash before the new venue opened to the public. He also played the first hand, which will included the presentation of a commemorative chip.

Following the ceremonies, Seminole Hard Rock Tampa presented to Garrett a $10,000 check for the charity of his choice, Maximum Hope Foundation, which offers urgent financial relief to families caring for a child with a life-limiting illness.

The casino also raised $3,000 for Julie Weintraub’s Hands Across the Bay charity via a media poker tournament, which was won by Ronnie Lane from 620 WDAE. Garrett also donated $500 to Hands Across the Bay as did celebrity poker player and Seminole Hard Rock Tampa ambassador, John Racener.

About Seminole Hard Rock Hotel & Casino Tampa
Seminole Hard Rock Hotel & Casino Tampa is the premier entertainment destination of Central Florida. Owned and operated by the Seminole Tribe of Florida, the property is one of the most successful and largest casinos in the world. Located off I-4 at North Orient Road and Hillsborough Avenue, about 10 minutes east of downtown Tampa, the casino features high stakes table games, thousands of the hottest slot machines as well as a smoke free slots area offering 250 popular games. Additionally, there is a new state-of-the-art Poker Room featuring 46 tables. The hotel is AAA Four Diamond rated and offers six award-winning Zagat-rated restaurants, including the fine dining venue Council Oak Steaks & Seafood. The only place to rock one’s body and soul, Rock Spa® is also available along with a plethora of VIP services. For more information, please call 866-502-PLAY or visit us online and via Facebook, Twitter, Instagram and Pinterest.