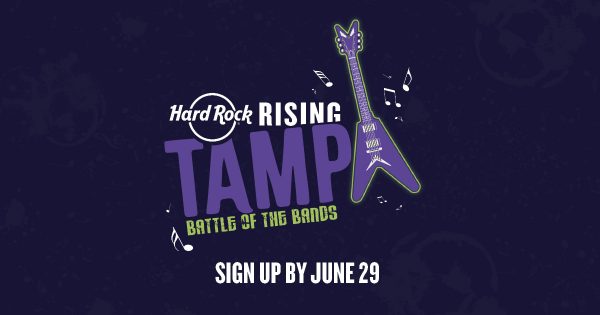 TAMPA, Fla. (June 11, 2018) – Seminole Hard Rock Hotel & Casino Tampa is calling on local bands to take the stage at the Hard Rock Cafe for the chance to play at this year’s 97x Next Big Thing!

As part of this year’s “Hard Rock Rising Tampa – Battle of the Bands,” music acts will have to, quite literally, battle it out for their shot at next level fame.

Rising to the Next Level

On Monday, July 16, the property will announce online the three finalist bands and the one wild card finalist band who will battle at the Live Competition on Wednesday, August 1, at Hard Rock Cafe Tampa.

The Live Competition will produce one Grand Prize winner who will win a performance slot at 97x Next Big Thing 2018 at the MidFlorida Credit Union Amphitheatre in Tampa. The Grand Prize winner will also receive an “Insta-Band” package from Dean Guitars that includes one five-piece drum kit, two electric guitars and one electric bass guitar.

The Live Competition judges will include a variety of music industry professionals. There will be five categories included in the judging criteria – Originality (30 percent), Musicianship (20 percent), Vocal Ability (20 percent), Stage Presence (20 percent) and Audience Reaction (10 percent).