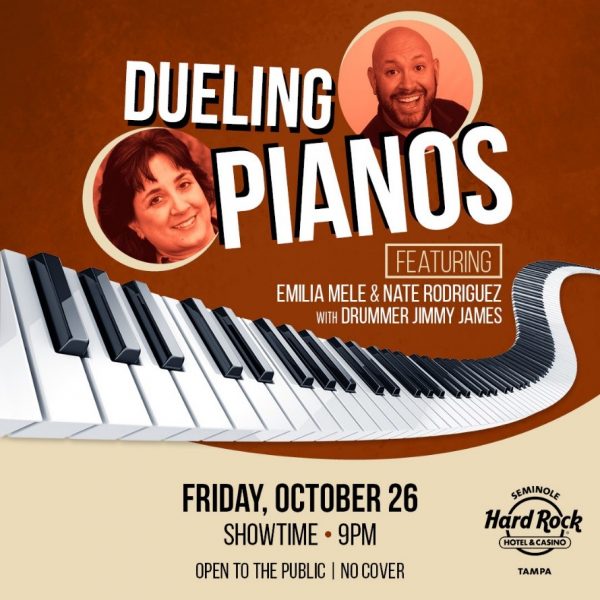 Dueling Pianos brings together talented musicians for a fun and entertaining evening. A wide range of genres can be expected including Rock N Roll, Hip Hop and R&B.

Emilia Mele is an award-winning piano bar entertainer, who brings excitement and fun to her dueling piano shows. Her vocals cover a wide range of styles and artists but are mostly compared to Janis Joplin and Melissa Etheridge. She can bring the house down with soaring vocals or get the room moving with solid rock n roll delivery.

Mele and her playing partners are adept at vocals, piano, bass, guitar, drums, and more, as they bring a real show of talent to their audiences. They cover a wide variety of music as they fulfill audience requests and are sure to bring the laughter with audience participation and witty novelty songs.

Nate Rodriguez is a talented multi-instrumentalist known for his dynamic vocals, quick wit, bountiful positive energy and ability to play all styles of music well. He is a trained and award-winning vocalist who has been singing professionally for nearly 20 years.

Rodriguez comedic charm and sense of humor have earned him a reputation as one of the most likable dueling piano players in the industry. Well-known as an entertainer who can perform all styles of music, Rodriguez has honed his skills in each style during his travels to parts of the country where that music comes from or is prevalent. He often encourages crowds to test the boundaries of what dueling pianos can be.

Patrons can expect to enjoy drink specials with a fun and authentic dueling piano show.