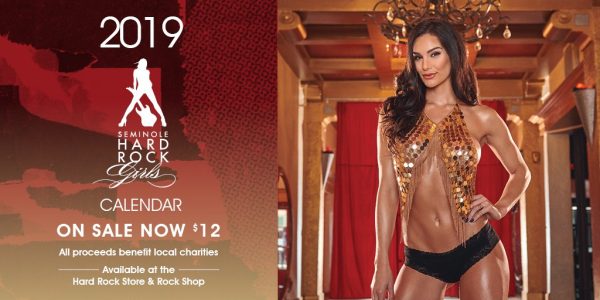 The calendar is on sale now at Seminole Hard Rock Tampa retail outlets. The cost per calendar is $12 and 100 percent of the funds generated from sales through 2019 will be distributed evenly amongst the selected 12 local charities.

Each charity will be featured alongside a 2019 Seminole Hard Rock Calendar Girl in connection with her month and assist in volunteer and fundraising opportunities.

This is the 13th year for the calendar which features 20 of Seminole Hard Rock Tampa’s hand-selected female team members.

A four-day photo shoot took place in August with the theme being “rocker glam.” It showcases various concert venues in Ybor City – The Ritz Ybor, The Orpheum, Crowbar and The Attic.

The calendar was shot by nationally recognized photographer Joey Wright and the Seminole Hard Rock Girls were styled by Amber Flowers, owner of the Glam Squad.