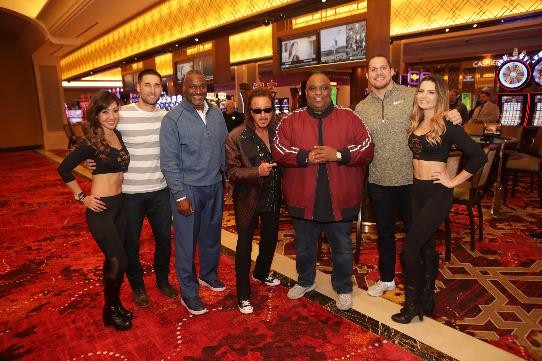 The Seminole Hard Rock Girls are joined by (left to right) Kevin Kiermaier, Derrick Brooks, Jimmy “The Mouth of the South” Hart, Orlando Davis and Anthony Chickillo at the world debut of One Card Blackjack.

The object of One Card Blackjack is to achieve a higher card count than the dealer without exceeding a total of 11.

To play against the dealer, guests must make a bet in the designated area. The King, Queen and Jack count as 10, the Ace counts as either 1 or 11, and all other cards count as their face value. Suits are of no significance. If the player’s initial card is an Ace, it is considered a “Blackjack” which is paid even money. When both the dealer’s and player’s initial card is an Ace, this will constitute a push.

One Card Blackjack also features an optional Bonus Bet wager. This wager will be paid at odds of 10 to 1, if the player’s initial card dealt is an Ace.

“One Card Blackjack is an exciting addition to our lineup of table games,” said Paul Mollo, Vice President of Table Games. “We’re confident our guests will gravitate to this new game.”

Match Play is a promotional offer issued as vouchers to use at a live table game. Guests must first sign up for a Seminole Wild Card, which is free at the Player’s Club.

Once issued, Match Play vouchers are good for use within 24 hours. They can be used at a favorite Blackjack, Baccarat or Pai Gow Poker table. Even money bets only.

Also, from Sundays to Thursdays, the property announced it will have $10 Table Minimums at select blackjack games.