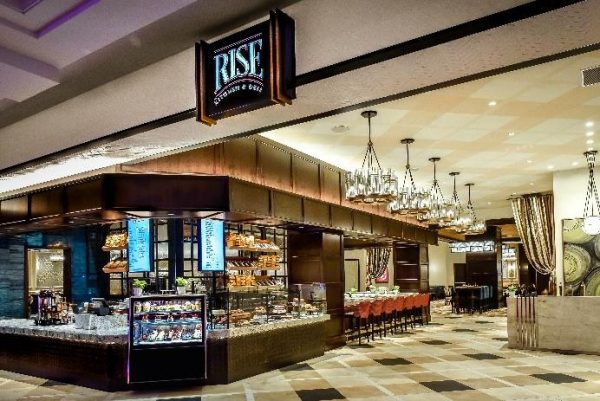 Formerly known as Rise Kitchen & Bakery, the new venue is divided into two dining areas that include Pullman style booths, along with table and banquette seating.

“Rise Kitchen & Deli is the go-to dining option for fresh, chef-driven food that compliments the soul,” said Dawn Lazo, vice president of food and beverage. “Whether you are looking for a morning treat, late night snack or anything in between, Rise Kitchen & Deli has something for everyone.”

Led by Chef Valentín Castañeda and Pastry Chef Stephan Schubert, the restaurant offers a unique menu with inspired breakfast offerings and house roasted deli sandwiches, as well as decadent cakes and pastries made from scratch each day.

Breakfast items include such favorites as grits & eggs, omelets and skillet platters, while the lunch menu features “From the Deli – Your Way,” which gives the guest a choice of meat, bread and spread along with house-made chips and a pickle. Main entrées include beef short ribs, salmon and pan seared pork chops.

The grab-and-go service includes a wide array of specialty coffees like Americano, chai latte and espresso. Additionally, there is an extensive list of pastries offered including chocolate chunk cookies, turtle brownies, sticky buns, éclairs and cheesecake on a stick.

Seminole Hard Rock Tampa will continue to expand and refresh its culinary amenities with the addition of a new 200-seat Italian restaurant slated to open in the fall. It will be the property’s third fine dining restaurant, joining the award-winning restaurants Council Oak Steaks & Seafood and The Rez Grill.

Seminole Hard Rock Hotel & Casino Tampa is the premier entertainment destination of Central Florida. Owned and operated by the Seminole Tribe of Florida, the property is one of the most successful and largest casinos in the world. Located off I-4 at North Orient Road and Hillsborough Avenue, about 10 minutes east of downtown Tampa, the casino features high stakes table games, thousands of the hottest slot machines as well as a new smoke free slots area offering more than 850 popular games. Additionally, there is a state-of-the-art Poker Room featuring 46 tables and an art deco-inspired Mezzanine Level Casino with more than 500 premium and high limit slots. The hotel is AAA Four Diamond rated and the property proudly offers seven award-winning restaurants, including the upscale dining venues Council Oak Steaks & Seafood and The Rez Grill. The only place to rock one’s body and soul, Rock Spa® & Salon, is also available along with a plethora of VIP services. For more information, please call 866-502-PLAY or visit us online and via Facebook, Twitter, Instagram and Pinterest.