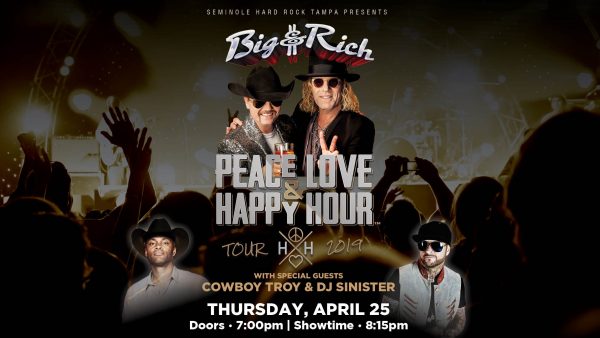 COUNTRY DUO TO HIT THE STAGE ON THURSDAY, APRIL 25

Country music superstars, Big & Rich, known for classics such as, “Comin to Your City” and “Save A Horse Ride A Cowboy,” will perform on Thursday, April 25 at Seminole Hard Rock Hotel & Casino Tampa along with special guests Cowboy Troy, DJ Sinister and Soul Circus Cowboys. Doors open at 7:00 p.m. and the show begins at 8:15 p.m.

To commemorate the addition of 900 new parking spaces in the recently completed Orient Road Garage expansion, Seminole Hard Rock Hotel & Casino Tampa is celebrating in a big and rich way with an outdoor concert for visitors and locals alike. The once in a lifetime show will take fans up close and personal with the country stars.

“We’re excited to officially welcome this talented musical duo, who will take the stage next month for a riveting performance in front of our newly expanded Orient Road Garage, which is just one of the completed elements of our massive renovation that will fully open later this year,” said Steve Bonner, President of Seminole Hard Rock Hotel & Casino Tampa.

Big Kenny Alphin and John Rich – Big & Rich – have blazed an indelible mark on modern country music, not simply by breaking the rules, but by setting them on fire. Big & Rich have captivated a multi-generational community of listeners with their sterling songcraft and recorded performances. Now a decade and a half into a storied career, they tour the country for more than 100+ dates annually, presenting electrifying concert spectacles of ceaseless energy and outrageous personality.

Tickets ranging from $55 to $150 are available for purchase online via Ticketmaster and the Rock Shop in Seminole Hard Rock Hotel & Casino Tampa. The concert is a 21 and up event and will be held rain or shine.

Seminole Hard Rock Hotel & Casino Tampa is the premier entertainment destination of Central Florida. Owned and operated by the Seminole Tribe of Florida, the property is one of the most successful and largest casinos in the world. Located off I-4 at North Orient Road and Hillsborough Avenue, about 10 minutes east of downtown Tampa, the casino features high stakes table games, thousands of the hottest slot machines as well as a new smoke free slots area offering more than 850 popular games. Additionally, there is a state-of-the-art Poker Room featuring 46 tables and an art deco-inspired Mezzanine Level Casino with more than 500 premium and high limit slots. The hotel is AAA Four Diamond rated and the property proudly offers seven award-winning restaurants, including the upscale dining venues Council Oak Steaks & Seafood and The Rez Grill. The only place to rock one’s body and soul, Rock Spa® & Salon, is also available along with a plethora of VIP services. For more information, please call 866-502-PLAY or visit us online and via Facebook, Twitter, Instagram and Pinterest.