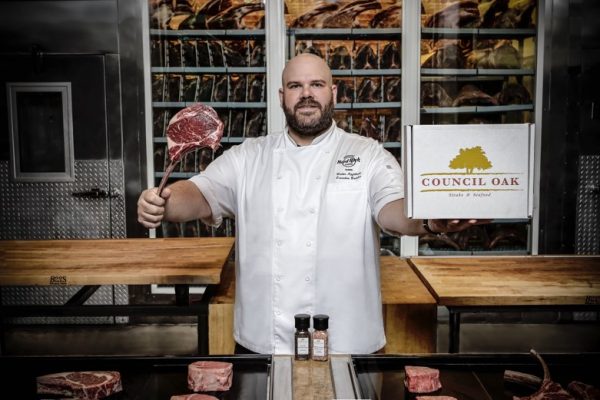 Apfelbaum, a renowned butcher has been in the meat industry for over thirty years.  Born in Asbury Park, New Jersey and raised in a German household, he began learning the tricks of the trade at his father’s best friend’s butcher shop at the ripe age of twelve, where he became truly mesmerized by the craft.  His pure talent and knack for cutting was so visible that he was introduced and soon hired by the most notable butchers in the tri-state area for seasonal work.   After high school graduation, Apfelbaum enrolled in a vocational school for culinary arts and became a butcher’s apprentice at Ocean Place Hilton Resort & Spa located in Long Branch, New Jersey.

Apfelbaum’s increased passion for the culinary arts led him to attend The Culinary Institute of America in Hyde Park.  Following graduation, he was recruited by Whole Foods to participate in their butcher training program, where he was mentored by the lead butcher for Whole Foods tri-state locations.   This invaluable experience eventually led him to travel abroad for several years throughout Europe visiting various regions from Denmark to Southern Italy to continue mastering his butchering skills, while also learning about the seafood trade.  Upon his return to the States, Apfelbaum worked at various butcheries and world-renowned steakhouses located within the tri-state area including Peter Luger’s, Delmonico’s, Gallaghers, and Keens; which allowed him to continue honing his skills with dry aging high end meats from Kosher to USDA Prime to Wagyu from Japan.

In 2009, he relocated to Tampa, Florida and joined the butcher team at Council Oak Steaks & Seafood, at the Seminole Hard Rock Hotel & Casino Tampa.  Three years later, the Seminole Tribe of Florida team offered him the opportunity to transfer to Seminole Casino Coconut Creek to open NYY Steak.  Additionally, he was asked to join the opening team for NYY Steak in Midtown Manhattan.

In 2017, Apfelbaum’s career path led him to Detroit, Michigan, where he brought his craft and knowledge of big city steakhouses to launch Prime + Proper, an award-winning steakhouse.  As of this summer, he has rejoined the team as executive butcher for all of the eateries within Seminole Hard Rock Hotel & Casino Tampa.  Apfelbaum’s day-to-day responsibilities include managing The Butcher Shop at Council Oak Steaks & Seafood, ensuring all cuts of meat are ordered and upheld to the highest standard of quality, educating front-of-house and back-of-the-house staff, and working with guests on the dining room floor of Council Oak to elevate their experience

After its 2007 opening inside Seminole Hard Rock Hotel & Casino Tampa, Council Oak Steaks & Seafood quickly became Tampa’s number one destination for prime steaks, fresh seafood and an award-winning wine list served in a contemporary upscale atmosphere. It’s considered fine dining at its best. All steaks are a minimum of 28 day dry-aged while the lamb is a minimum of 14 day dry-aged, and all cut right in the restaurant’s very own on-site butcher shop. The fresh fish is line-caught in Florida and the Alaskan king crab legs are right from the Bering Sea. Custom saltwater tanks also keep the live Maine lobsters fresh.  The namesake for Council Oak Steaks & Seafood comes from an actual tree located on the Seminole Tribe of Florida (STOF) reservation in Hollywood (Fla.) where ceremonial and official STOF business is conducted.

Owned and operated by the Seminole Tribe of Florida, Seminole Hard Rock Hotel & Casino Tampa is one of the largest and most successful casinos in the world offering award-winning gaming, hospitality and entertainment. The casino features more than 4,000 of the hottest slot machines, 138 table games and a state-of-the-art Poker Room featuring 46 tables. Additionally, the property offers a smoke-free Mezzanine Level Casino. The hotel is AAA Four Diamond rated and the property proudly offers seven award-winning restaurants, including the upscale dining venues Council Oak Steaks & Seafood and The Rez Grill. Renovations and expansions set to debut in the fall of 2019 include a new hotel tower with over 500 rooms, three ultra-lavish pools and expansive gaming space. The property will also unveil a new Rock Spa® & Salon, meeting space, entertainment venue, arrival experience as well as new food and beverage options. The resort is located off I-4 at North Orient Road and Hillsborough Avenue, about 10 minutes east of downtown Tampa. For more information, please call 866-502-PLAY or visit us online and via Facebook, Twitter, Instagram and Pinterest.