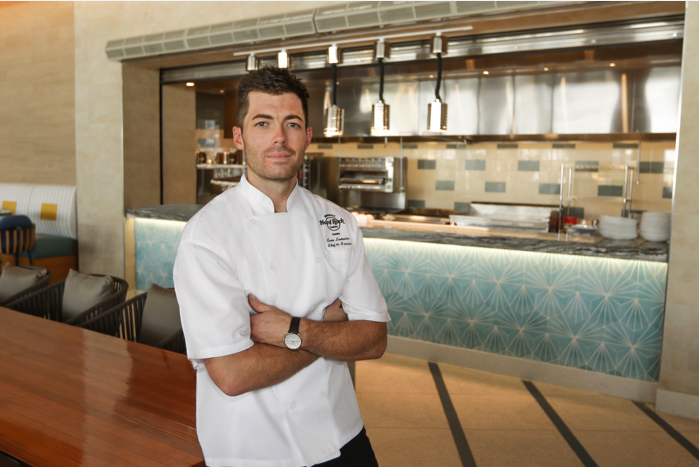 Born in Hilton Head, South Carolina, Leutwiler began cooking in fine dining establishments at the age of sixteen while growing up in Chattanooga, Tennessee.  His love for being in the kitchen blossomed as a result of growing up in a family of food and wine connoisseurs.  After graduating with a B.A. in Philosophy and a minor in Spanish from the University of Tennessee in Knoxville, he relocated to Los Angeles to pursue his passion in the culinary world.  Leutwiler’s innovative skills allowed him the opportunity to work within the nation’s most highly-esteemed kitchens including celebrity hot spot, Spago in Beverly Hills; as well as award-winning, Rustic Canyon located in Santa Monica, where he served as junior sous chef.

These invaluable experiences eventually led him to work with James Beard-award winning chefs, Jon Shook and Vinny Dotolo and their nationally renowned restaurant group. Under their direction, Leutwiler served as a line cook at Animal restaurant, special event chef for their catering company, Carmelized Productions, and was a member of the opening team for Son of A Gun and Trois Mec.  Following these pivotal years, he had the good fortune of being retained as a private chef for Hollywood celebrities including actress, Demi Moore, and late-night TV host, Jimmy Kimmel.  While cooking for the stars, Leutwiler also served as an assistant to BBQ legend, Adam Perry Lang, where he was responsible for numerous pop-ups and traveling barbecue events.

As a result of his fluency in Spanish, Leutwiler has traveled extensively to Columbia and Argentina to cultivate an appreciation for South American cuisine, wine-making and culture.  Having spent the past two years as a restaurant consultant in Charleston, South Carolina, Leutwiler has recently joined the resort as chef de cuisine at the 90-seat contemporary dining establishment, Pool Bar & Grill, at the Seminole Hard Rock Hotel & Casino Tampa.  As a passionate chef, Leutwiler continually seeks new ways to perfect his craft and exceed the highest quality standards.

As the newest addition within Seminole Hard Rock Hotel & Casino Tampa, Pool Bar & Grill is a casual, upbeat, full-service poolside eatery conveniently located between the West Hotel Tower and the new Banquet Event Center set amidst the resort’s 3 glimmering pools. Helmed by chef de cuisine, Evan Leutwiler, a culinary professional with extensive experience in both celebrity homes and award-winning restaurants, the new outpost is open 7 days a week for breakfast from 7 a.m.- 11 a.m., and lunch and dinner from 11 a.m. to sundown.  The open kitchen at Pool Bar & Grill serves up an enticing artisanal menu featuring lite frittatas, fresh salads and sandwiches to Avocado Toast and Mexican Shrimp Ceviche. Additionally, patrons can relax and enjoy a fine selection of tasty crafted cocktails within the open-air dining room or at the bar where state-of-the-art slot machines line the bar top.

Owned and operated by the Seminole Tribe of Florida, Seminole Hard Rock Hotel & Casino Tampa is one of the largest and most successful casinos in the world offering award-winning gaming, hospitality and entertainment. The casino features nearly 5,000 of the hottest slot machines, 179 table games and a state-of-the-art Poker Room featuring 46 tables. Additionally, the property offers a smoke-free Mezzanine Level Casino. The hotel is AAA Four Diamond rated and the property proudly offers ten restaurants, including the upscale dining venues Council Oak Steaks & Seafood and The Rez Grill, as well as the new elegant Italian restaurant, Cipresso. Recent openings include a new hotel tower, an elevated arrival experience, the Hard Rock Event Center and Rock Spa® & Salon. The resort is located off I-4 at North Orient Road and Hillsborough Avenue, about 10 minutes east of downtown Tampa. For more information, please call 866-502-PLAY or visit us online and via Facebook, Twitter, Instagram and Pinterest.