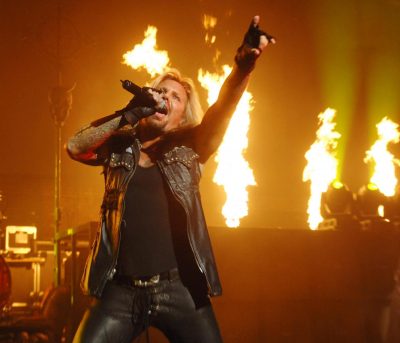 Neil is an international superstar, accomplished businessman and heartfelt philanthropist. His unmistakable voice leads some of the greatest rock songs of a generation including “Wild Side,” “Shout at the Devil,” “Home Sweet Home,” “Girls, Girls, Girls,” “Dr. Feelgood,” “Kickstart My Heart,” “Same Ol’ Situation,” and many others.

He fronted the popular band Rock Candy before reuniting with high school buddy Tommy Lee in 1981, establishing his spot in rock and roll history with the formation of Mötley Crüe. Neil continues to perform all the classic Mötley Crüe hits with select cuts from his three solo albums. Additionally, he is working on new music, and has hinted about performing some of it during this tour.

“I’ll say that we are recording some stuff for a new record this year,” Neil said in a Loudwire interview in January. “You often hear some surprises at our shows. I don’t want to give away some of those surprises…the music is exciting. It’s good, fun, nasty, raw energy and great songs.”

“I have to represent this music honorably,” Malloy said. “I respect what has come before me and have to remind fans of where they were when they first heard these songs. I also have to be myself at the same time. When I first heard my own voice with Great White’s music, I knew something special was going on.”

Great White has sold over 10 million albums worldwide, has six Top 100 Billboard hits, nine Top 200 Billboard albums, two platinum albums, and clocked the top of MTV four times. Their sound has captivated audiences worldwide with crushing, blues-based guitar riffs and swagger that invokes an emotional high for anyone that listens.