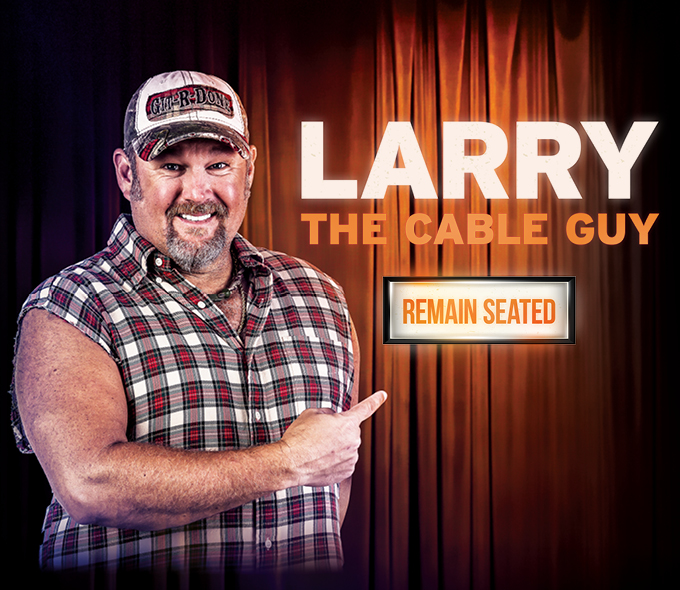 Daniel Whitney, professionally known as Larry The Cable Guy, is a multiplatinum recording artist, Grammy nominee, Billboard award winner and one of the top comedians in the country.

In March of 2006, the Blue Collar boys reunited to shoot Blue Collar Comedy Tour, One For The Road in Washington, DC at the Warner Theater. The movie had its world premiere on Comedy Central June 4, 2006, again receiving some of the highest ratings. The soundtrack was nominated for a 2006 Grammy award.

Whitney’s first comedy album release Lord, I Apologize has reached gold status, selling more than 500,000 copies. The CD was #1 on the Billboard Comedy Charts for 15 weeks in a row. His DVD special Git-R-Done, has sold more than 1 million copies and has been certified platinum. He was Billboard’s 2005 Comedy Artist of the year and Comedy Album of the year and he received the Billboard Top Comedy Tour Award in 2006. He is a bestselling author and his book Git-R-Done, (2005) debuted at #26 on the New York Times bestseller list. Whitney was named to Forbes Celebrity 100 list in 2006, 2007, 2011 and 2012. This lists the hottest and most successful people in the entertainment industry.

Whitney has starred in movies such as Jingle all the Way 2, A Madea Christmas, Tooth Fairy 2, and his first feature Larry the Cable Guy: Health Inspector. When Health Inspector was released on DVD in August 2006 it sold more than one million copies in the first week of release. Additionally, he is the voice of the beloved Mater in the Golden Globe winning animated feature film Cars (2006) and Cars 2 (2011) from Disney/Pixar.  Both movies opened number one at the box office and combined have grossed more than $1 billion worldwide. He returned as the voice of Mater for Cars 3 (2017).