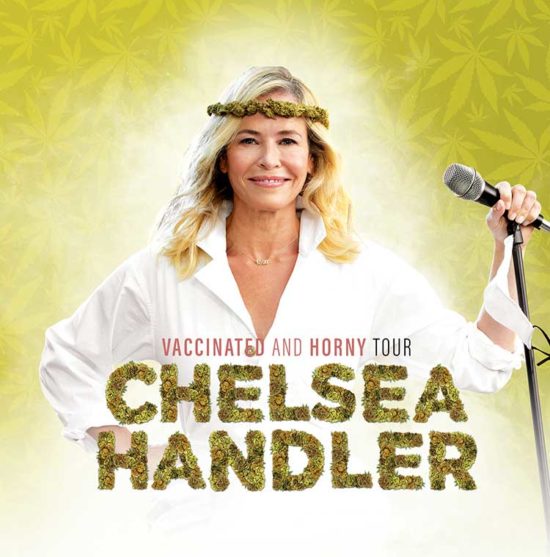 Tickets starting at $90 will be available Friday, June 3, at 10 a.m. via seminolehardrocktampa.com and Ticketmaster.

Chelsea Handler is a comedian, television host, best-selling author and advocate whose humor and candor have established her as one of the most celebrated voices in entertainment and pop culture. After a strong seven-year run as the host of E!’s top-rated Chelsea Lately, a tenure in which Handler was the only female late-night talk show host on-air, she then launched her documentary series Chelsea Does followed by her talk show Chelsea on Netflix in 2016. She has penned six best-selling books, five of which have reached #1 on the New York Times Bestseller list, including 2019’s Life Will Be the Death of Me. Most recently, she released her first stand-up special in over 6 years, the critically acclaimed Chelsea Handler: Evolution on HBO Max, and launched her iHeart Radio advice podcast, Dear Chelsea. Handler has been honored by TIME magazine as one of its annual “TIME 100;” Glamour Magazine as one of their Women of the Year; and the Human Rights Campaign, which gave her its Ally for Equality Award. Handler’s wide appeal and multiplatform success have been highlighted by publications all over the world.

About Seminole Hard Rock Hotel & Casino Tampa
Owned and operated by the Seminole Tribe of Florida, Seminole Hard Rock Hotel & Casino Tampa is one of the largest and most successful casinos in the world offering award-winning gaming, hospitality, and entertainment. The casino offers nearly 5,000 of the hottest slot machines, 179 table games, a state-of-the-art Poker Room featuring 46 tables and a smoke-free Mezzanine Level Casino. The 800-room hotel is AAA Four Diamond rated and proudly offers 12 restaurants, including upscale dining venues Council Oak Steaks & Seafood, The Rez Grill, and Cipresso. Amenities include the 1,500-seat Hard Rock Event Center, which hosts some of the nation’s hottest entertainers and must-see concerts; a 60,000-square-foot pool deck area with three pools and 19 cabanas; as well as the luxurious Rock Spa® & Salon. The resort is located off I-4 at North Orient Road and Hillsborough Avenue, about 10 minutes east of downtown Tampa. For more information, please call 866-502-PLAY or visit us online and via Facebook, Twitter and Instagram.

About Hard Rock®:
Hard Rock International (HRI) is one of the most globally recognized companies with venues in 68 countries spanning 253 locations that include owned/licensed or managed Hotels, Casinos, Rock Shops®, Live Performance Venues and Cafes. HRI also launched a joint venture named Hard Rock Digital in 2020, an online sportsbook, retail sportsbook and internet gaming platform. Beginning with an Eric Clapton guitar, Hard Rock owns the world’s largest and most valuable collection of authentic music memorabilia at more than 86,000 pieces, which are displayed at its locations around the globe. In 2021, Hard Rock was honored as one of Forbes Magazine’s Best Employers for Diversity, a Top Employer for Women and the Top Employer in the Travel & Leisure, Gaming, and Entertainment Industry. Hard Rock was also designated as a U.S. Best Managed Company by Deloitte Private and The Wall Street Journal and named the top performing hotel brand in J.D. Power’s North America Hotel Guest Satisfaction Study for the third consecutive year in 2021. The brand is owned by HRI parent entity The Seminole Tribe of Florida. For more information on Hard Rock International, visit www.hardrock.com
or shop.hardrock.com.