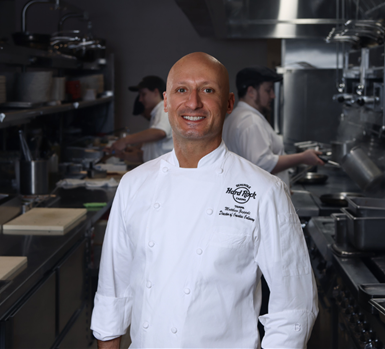 A New Jersey native, Zappoli will oversee all the restaurants at Seminole Hard Rock Tampa. He was previously chef de cuisine at Cipresso.

Zappoli began his long-standing career in 1998 when he graduated with honors from the prestigious Culinary Institute of America in Hyde Park, New York. Following graduation, he was hired by his now mentor, celebrity chef, and restaurateur Charlie Palmer, at the highly acclaimed Aureole located in New York City. Zappoli’s appetite for success and creativity led him to advance quickly and work across the country in various Charlie Palmer properties including the Las Vegas-based Aureole located in the Mandalay Bay Hotel and Dry Creek Kitchen located in Hotel Healdsburg in Sonoma County, California.

In 2008, Zappoli decided to take his wealth of experience and return to his New Jersey stomping grounds where he successfully opened and managed his own restaurant, Tre Amici, along with his brother. In 2010, Zappoli garnered national attention when he was crowned champion on an episode of The Food Network’s “Chopped.”

Prior to his arrival at Seminole Hard Rock Tampa, Zappoli served as executive chef at NYY Steak located at sister property Seminole Casino Coconut Creek since 2016.

Zappoli is grateful for the many experiences he has had throughout his culinary career.  When he is not hustling on the line, he enjoys exploring and experiencing new and different restaurants, beaches, and cities around Florida and beyond.

His other hobbies include gardening (growing his own herbs and vegetables), snowboarding, playing the guitar and trying new recipes at home.