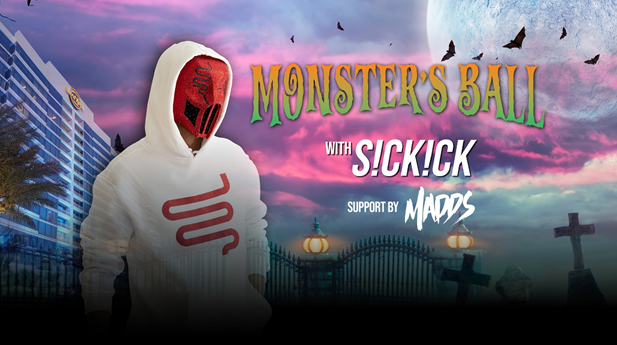 With Halloween on the horizon, Hard Rock Cafe in Seminole Hard Rock Hotel & Casino Tampa has announced it will host the “Monster’s Ball” on Saturday, October 29, beginning at 11p.m.

Tickets priced at $75 will go on sale online at seminolehardrocktampa.com or via Ticketmaster beginning Friday, August 19, at 10 a.m.

Sickick will be the event’s special guest.” He is an enigmatic artist making a name for himself in music without ever showing his face.

The masked producer, vocalist, and songwriter has crafted his unique style of electronica by layering seductive lyrics over heavy electronic percussion. He brings together elements of trap, bass, reggaeton, electro, as well as rhythm and blues to create atmospheric, otherworldly auditory experiences.

Despite his musical talent, the idea of fame and crowds was once a cause of anxiety for Sickick. The iconic mask which is now ubiquitous with his image and music has allowed him to overcome his fears. He has totaled over 100 million worldwide streams and listeners from more than 80 countries.

Also performing at “Monster’s Ball” will be MADDS, a DJ, electronic music producer, and songwriter.

During her tenure, MADDS has shared stages with the likes of Steve Aoki, Bad Bunny, Deorro, Hardwell, David Guetta, Martin Garrix, and more. She’s been a featured artist at major American music festivals such as Coachella and EDC, and has toured internationally throughout Europe, Australia, and Mexico.

About Hard Rock®
Hard Rock International (HRI) is one of the most globally recognized companies with venues in over 70 countries spanning 265 locations that include owned/licensed or managed Rock Shops®, Live Performance Venues and Cafes. HRI also launched a joint venture named Hard Rock Digital in 2020, an online sportsbook, retail sportsbook and internet gaming platform. Beginning with an Eric Clapton guitar, Hard Rock owns the world’s largest and most valuable collection of authentic music memorabilia at more than 86,000 pieces, which are displayed at its locations around the globe. In 2022, Hard Rock Hotels was honored as the number one brand in Outstanding Guest Satisfaction for the second year in a row among Upper Upscale Hotels in J.D. Power’s North America Hotel Guest Satisfaction Study. This designation is the fourth consecutive year the iconic brand has been among top brands in this category.