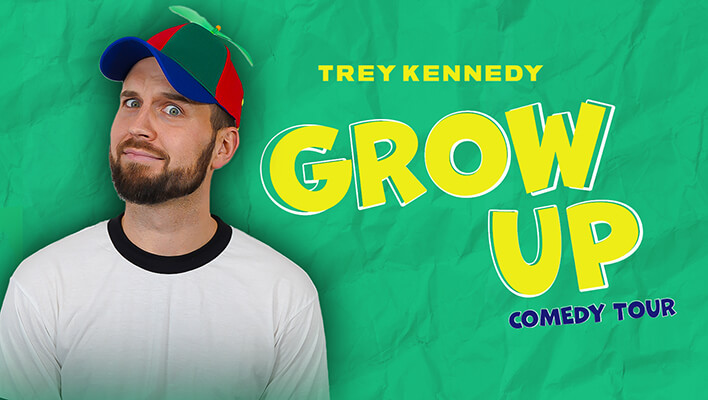 Fans can access venue presale tickets beginning Thursday, January 26, at 10 a.m. through Seminole Hard Rock Tampa’s Twitter, Instagram, or Facebook pages.
Tickets will go on sale online at seminolehardrocktampa.com or via Ticketmaster beginning Friday, January 27, at 10 a.m.
Kennedy is a born and raised Oklahoman who never expected to enter the entertainment industry. While attending college at Oklahoma State University, he found fame on the mobile app Vine, amassing more than 2.5 million followers. He was a top creator on the app for more than three years and, through this experience, discovered a passion for entertainment.
With continued social media success on platforms such as Instagram and TikTok where he has a combined 12-plus million followers, Kennedy currently has a podcast titled “Correct Opinions” and just concluded a sold-out comedy tour selling out cities across the United States.
Kennedy’s self-produced comedy special “Are You For Real?” can now be streamed on YouTube.

Owned and operated by the Seminole Tribe of Florida, Seminole Hard Rock Hotel & Casino Tampa is one of the largest and most successful casinos in the world offering award-winning gaming, hospitality, and entertainment. The casino offers nearly 5,000 of the hottest slot machines, 179 table games, a state-of-the-art Poker Room featuring 46 tables and a smoke-free Mezzanine Level Casino. The 800-room hotel is AAA Four Diamond rated and proudly offers 12 restaurants, including upscale dining venues Council Oak Steaks & Seafood, The Rez Grill, and Cipresso. Amenities include the 1,500-seat Hard Rock Event Center, which hosts some of the nation's hottest entertainers and must-see concerts; a 60,000-square-foot pool deck area with three pools and 19 cabanas; as well as the luxurious Rock Spa® & Salon. The resort is located off I-4 at North Orient Road and Hillsborough Avenue, about 10 minutes east of downtown Tampa. For more information, please call 866-502-PLAY or visit us online and via Facebook, Twitter and Instagram.

Hard Rock International (HRI) is one of the most globally recognized companies with venues in over 70 countries spanning 260 locations that include owned/licensed or managed Rock Shops®, Live Performance Venues and Cafes. HRI also launched a joint venture named Hard Rock Digital in 2020, an online sportsbook, retail sportsbook and internet gaming platform. Beginning with an Eric Clapton guitar, Hard Rock owns the world’s largest and most valuable collection of authentic music memorabilia at more than 86,000 pieces, which are displayed at its locations around the globe. In 2022, Hard Rock Hotels was honored as the number one brand in Outstanding Guest Satisfaction for the second year in a row among Upper Upscale Hotels in J.D. Power’s North America Hotel Guest Satisfaction Study. This designation is the fourth consecutive year the iconic brand has been among top brands in this category. HRI is the first privately-owned gaming company designated U.S. Best Managed Company by Deloitte Private and The Wall Street Journal for the second year. Hard Rock was also honored as one of Forbes’ Best Employers for Women, Diversity and New Grads and a Top Large Employer in the Travel & Leisure, Gaming, and Entertainment Industry. In 2021, Hard Rock Hotels & Casinos received first place ranking in the Casino Gaming Executive Satisfaction Survey conducted by Bristol Associates Inc. and Spectrum Gaming Group for six of the last seven years. For more information on Hard Rock International, visit www.hardrock.com or shop.hardrock.com.
###